As you know from the original announcement, we are in the process of upgrading the ADX token to add staking incentives and DeFi features. So far, we have successfully audited and deployed the new contracts, launched built-in flash loans and gained exchange support - and most importantly, announced the new token economics and incentivized staking.

Today, we have reached an important milestone - it’s finally time to release our token upgrade tool and urge our community to upgrade their ADX to the new token, since exchanges will no longer accept the legacy ADX.

To avoid confusion, we recommend you don’t deposit your tokens to exchanges until all of them migrate to the new ADX and you’ve swapped your tokens through our official tool.

If your tokens are already on any of the exchanges mentioned below or staked on staking.adex.network, they have been automatically upgraded.

If you have tokens on an exchange that isn’t listed above or hasn’t announced plans to support the new ADX, we recommend that you withdraw them to your own wallet and upgrade them.

First, you need the MetaMask browser extension and you need to hold your ADX on it. If you use a hardware wallet such as Trezor or Ledger, you can easily connect it to MetaMask (this doesn’t export your private keys). If you use a keystore file (JSON), you can still import it.

Once you’ve got your ADX wallet set up with MetaMask, you have to go to staking.adex.network - you will be prompted to upgrade your legacy ADX (see image below). 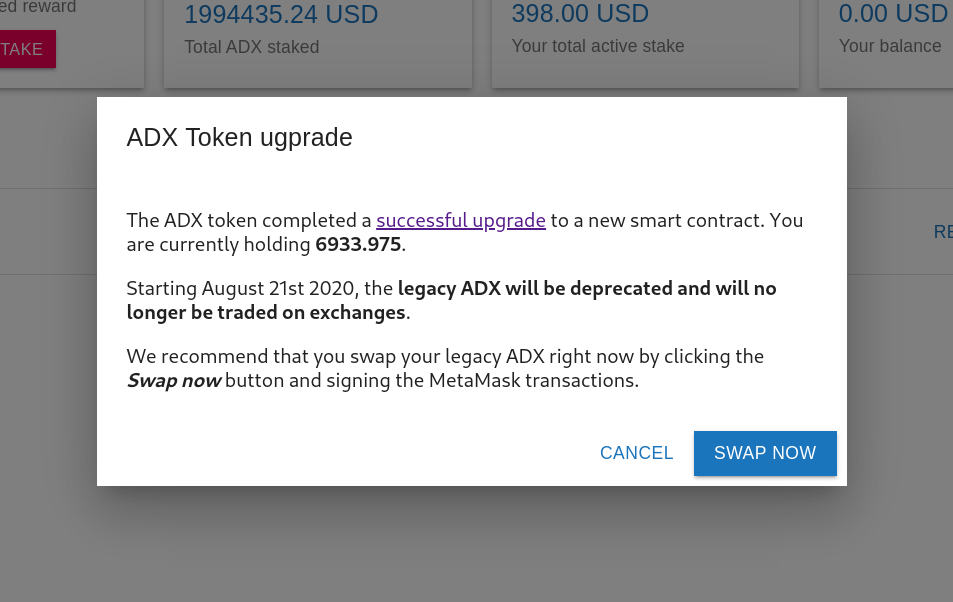 Just click “Swap now” and sign the pending MetaMask transactions. Once the transactions are confirmed on the Ethereum network, you’re all set.

If you close the pop-up by mistake, you should simply reload the page and it will appear again. If you see no pop-up, make sure you have connected the correct Metamask address and that you have no active pop-up blocker.

OPTIONAL: After this, we recommend that you add the new ADX to MetaMask so that it shows in “Assets”. Here’s how to do it:

How to find out whether I hold the new or the legacy ADX?

MORE ON THE ADEX BLOG

$ADX-LOYALTY Pool Retires: What Does This Mean for $ADX Staking and Why It is Good News

Optimize your yield with Yearn Finance directly into Ambire Wallet

At AdEx Network, we believe in the power of advertising. We also believe it should be used right — and for good.... Read More

We are delighted to announce a new ADX incentive program (a.k.a farm) for liquidity providers.... Read More

To celebrate our successful token upgrade on Binance, we teamed up with them to run a trading competition. The prize pool is huge - you can win 60,000 USD in prizes (payable in ADX tokens).... Read More